For those living in Crawford County, Arkansas, the weekend’s news was horrifying. On Sunday, an expletive-ridden video surfaced of two Crawford County Sheriff’s deputies and a Mulberry police officer using brutal force against Randal Worcester, a South Carolina man traveling through Arkansas. Some in the area claim it was not unexpected behavior from Deputy Levi White, whom the sheriff’s department identified as one of three officers appearing to beat the man on the disturbing tape. These residents claim the recent incident is not White’s only violent offense.

Christina, an area woman who has asked to have her last name withheld, tells Rolling Stone that one of her family members has had two altercations with White — who has been suspended and placed on leave since the incident last weekend — over the course of two years, both of which resulted in alleged physical abuse.

“I’m not saying [my family member] is a saint, but… [they] didn’t deserve to be beat,” Christina says. About a year and a half ago, Christina says the family member, who “likes to drive fast,” had encountered White while speeding and was arrested. According to Christina, who saw the family member immediately after the incident, White had “blacked [the family member’s] eye.” The individual told her White “rammed [their] head in the ground” during that arrest. 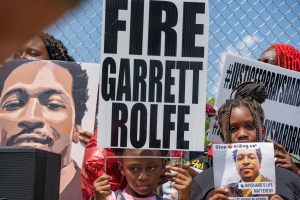 About a year later, Christina says, the individual was at a gas station, saw White there, and took off running. Christina says she saw and spoke with the family member shortly after the incident and that they knew they “should have stopped” but didn’t because they were scared of encountering White again.

The family member was apprehended. “Levi came out of nowhere and just grabbed [them] from behind the neck and slammed [them] down and started punching [them],” Christina claims her family member later told her. She saw the family member shortly after the alleged incident and says it ended with welts on the person’s head and the side of their face. She and the family member are planning to pursue a lawsuit.

Two others have said they, too, have experienced excessive force in recent weeks at the hands of White. During a press conference on Tuesday, two local residents, Teddy Wallace and Tammy Nelson (who is identified as Tammy Parker on Facebook), each shared stories of alleged violent encounters with White.

Carrie Jerrigan, a lawyer for Wallace, alleged that he was tased and beaten with a baton while being arrested in Crawford County around a month ago and that White was involved, NBC’s 5News reports. Wallace said that he was beaten in the head with a baton and suffered from bruises on his legs and arms.

In the same segment, as well as on lengthy posts on Facebook, Nelson has said White became physically aggressive after she began videotaping him when he responded to her home in connection with a “civil matter” involving her neighbor. Nelson alleges White grabbed her by the arm and swung her around, which forced her to drop the phone. Once she was on the ground, she claims White put his arm around her neck and kneed her in the side. “I felt disrespected and violated as he was on top of me,” Nelson told the station through tears. He then allegedly “yanked” her up to her feet. She says she asked what she was being arrested for, and he did not respond.  (The station reported that she told them she was charged with harassment and obstruction of governmental operations.)

White’s attorney, Russell Wood, denies Nelson’s accusations against his client. “There are always people coming out of the woodwork when there is media coverage of police officers,” Wood said in a statement to Rolling Stone on Tuesday afternoon. “The Tammy Nelson (Parker?) incident was fully investigated by the Sheriff’s Department and determined to be completely unfounded.” He said that “Deputy White has no knowledge” of Christina’s claims about her family member and said Wallace’s allegations were “fake news. White does not, and did not, even have a Taser.”

In a lengthy statement about the original video depicting the police beating Worcester last weekend, Wood said there is another full, unedited video that has not been released and that White was “viciously attacked” by the suspect. ​​”Such a violent suspect cannot be allowed to remain unrestrained and all necessary force is authorized to arrest this type of violent suspect. The amount of force authorized under the law is always relative to the offense the suspect commits,” Wood added.

Rolling Stone’s attempts to reach the Crawford County Sheriff’s Department for comment were unsuccessful. On Sunday evening, following the incident, Crawford County Sheriff Jimmy Damante said in a statement via 40/29 News: “I hold all my employees accountable for their actions and will take appropriate measures in this matter.”

In addition to the allegations by Nelson, Wallace, and Christina following the weekend’s videotaped incident in Crawford County, Rolling Stone has learned that White was also alleged to have covered for his superior’s abuse during a federal investigation involving police brutality by former sheriff Anthony Boen in nearby Franklin County. (White was not alleged to have been involved in the underlying allegations against Boen.) In the case, Boen was convicted on two counts of deprivation of rights under the color of law connected to the use of unreasonable force by a law enforcement officer; he was found not guilty of a third count. Boen was sentenced to four years in prison; he has appealed.

White had worked with Boen as a Franklin County Sheriff’s Deputy and was working at the Franklin County jail when one of the three people Boen had allegedly assaulted was brought into the jailhouse. White allegedly initially told the FBI, which was investigating Boen, that he had limited contact with Boen and that he did not remember the alleged victim having any injuries when he was brought to the jail.

The next day, according to prosecutors, White contacted the FBI to “clarify his statement.” The FBI interviewed White again, and White said that the victim had “struck his head and face several times while being transported from the patrol vehicle to his jail cell,” according to a Pre-Sentencing Investigation Report obtained by Rolling Stone that was prepared following Boen’s conviction.

According to the Report, the FBI then found that White and Boen had multiple telephone conversations and had exchanged text messages, including a 21-minute call that ended a minute before White contacted the FBI, saying he wanted to clarify his original statement. While it’s unclear whether White faced any repercussions for his calls and texts with Boen, this in part led prosecutors to accuse Boen of violating his bond conditions by having contact with a witness. “The government further alleged that the defendant [Boen] appeared to be actively attempting to tamper with witnesses, specifically White…” Following this, the court put special conditions on Boen’s bond, requiring that he not have any contact — directly or indirectly — with White and other witnesses involved in the case.

Lori Greene, the mother of one of the victims Boen was convicted of having used unreasonable force against, sees the problem of violence in Arkansas law enforcement as a larger issue. She tells Rolling Stone that while her son did something “really stupid” — she says he had been doing meth and was arrested for a domestic disturbance — he did not deserve what happened to him. “I understand that what he did was wrong,” she says. “He understands that he’s in prison. He goes up for parole next year. He takes full responsibility for what he did. That did not give the sheriff the right to do what [he] did.”

Christina says something needs to change because the trust within the community has been broken. “People are afraid to speak up because they live here. They have to drive back and forth to work, you know?” she says of the fear that accompanies speaking out. Of her family member, “he’s been in trouble,” she says. “And now he’s just to the point where he just don’t care. If he sees a cop, he’s just gonna do whatever, because [of] the way they treat people.”